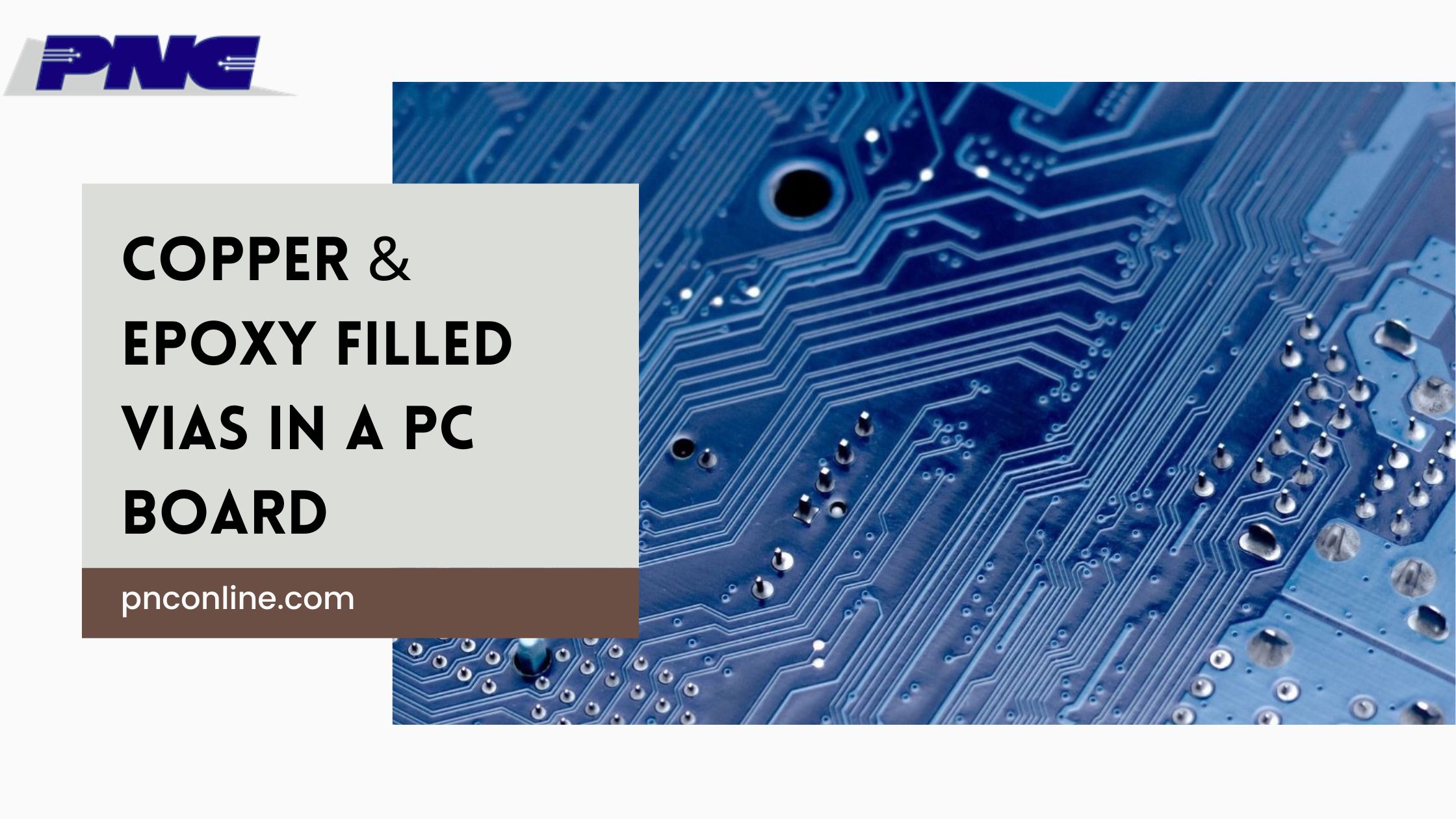 Copper & Epoxy Filled Vias in a PC Board

Printed circuit boards have holes made through drilling to electrically connect various PCB layers. Manufacturers have to fill vias with different materials which are conducive or non-conductive, including copper, epoxy, etc. Via filling helps reduce air or liquid trapping, thus enhancing a PCB’s function. If anything gets trapped in the hole, it would affect the PCB assembly at a high temperature which is essential for soldering without lead.

The via-in-pad is the latest technology to fill vias, however, it is more costly than the old methods, such as through-hole. HDI boards with micro-vias work better because of their low weight and compact form factor. Such vias reduce the distance between the components, eliminating trace resistance and enhancing conductivity. The via-in-pad technology also helps deal with the BGA issues.

There are many advantages of copper or epoxy-filled vias, such as:

Types Of Via Filling

PC Board Manufacturers fill vias according to PCB requirements. Some common practices of via filling are as below:
Vias Filled With Conductive Materials
Such vias help in signal transfer and also enhance their thermal transfer. Conductive-filled vias have either copper or silver filling to help conduct maximum heat far from PCB components. As copper is a metal, it protects the IC from heat. There are two types of epoxy fillings, such as
Copper Conductive Epoxy: It is better than silver epoxy when it comes to thermal conductivity. Also, the cost of conductive via fill is often very high, like it is 5 times more than the non-conductive filling.
Silver Epoxy: Silver epoxy is a common practice for via fill because it is cheap. However, it is equally good at conducting the current between the inner layers of a PCB and its vias.
Vias Filled With Non-Conductive Materials
The purpose of the filling of the non-conductive via is to protect vias from debris or other elements. It is obvious from the name that such vias can’t conduct heat or electric signals. But, copper plating is still there that conducts heat and current. It differs from traditional vias that have air in the hole that we replace with a filling material. The non-conductive filling also enhances the structure of the copper pad and covers vias in a via-in-pad technology.
Make sure the CTE value of via filling is compatible with the laminate to prevent stress fractures. The stress occurs because of expansion or contraction, as the filling material gets hot and expands faster than the surrounding laminate. So an unequal expansion can damage the area between the hole’s wall and the pad. The expansion of conductive materials can affect the process of reflow soldering. 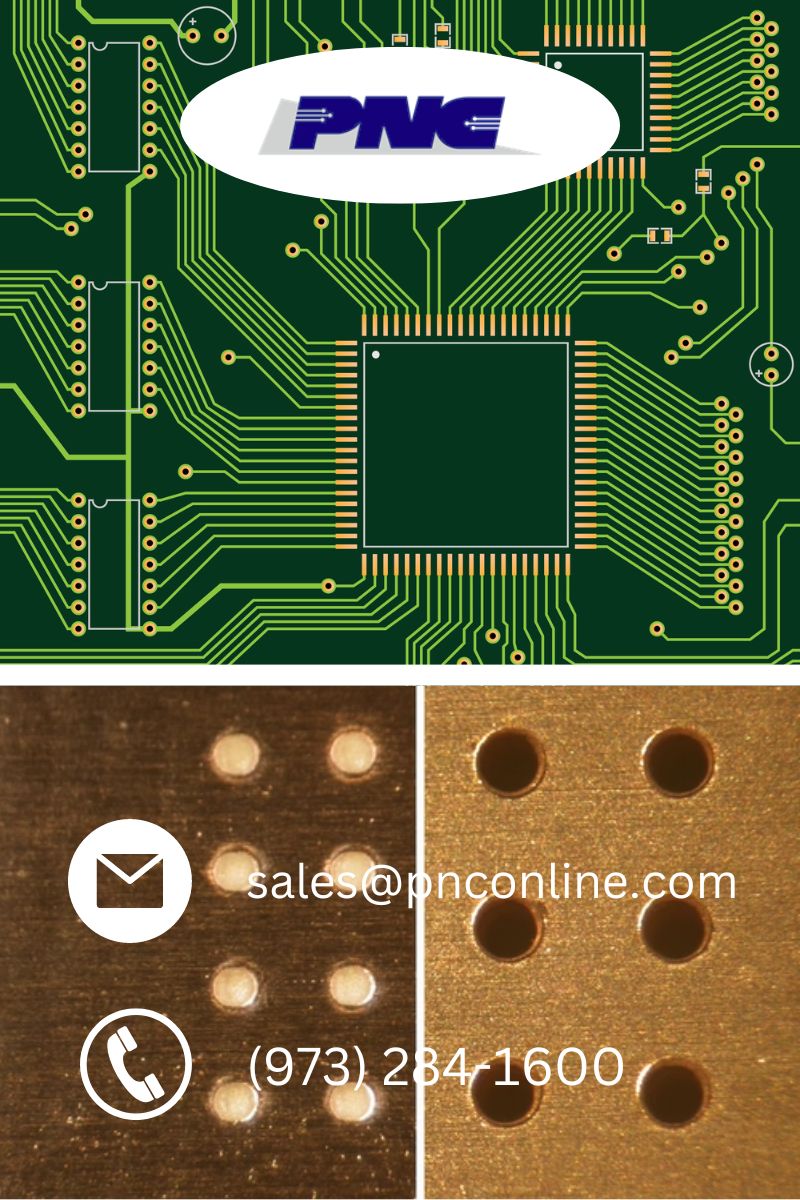 Shut-Filled Vias
There is another technique of filling vias known as a copper-plated shut filling, however, a few printed circuit board manufacturers practice it. This method goes well with both through-hole and micro-vias.
Some manufacturers can plate shut the through-hole vias which are 12 mils in diameter. Factors like air or fluid accumulation in the holes don’t matter in this case. The plated shut-via filling is 10 times more in thermal conductivity than other filling methods. Hence, you can consider it a logical and effective way of heat dissipation. In general, the copper-shut via is ideal where the aspect ratio is 10:1 or the diameter of the vias is lower than 8mils.
The plate shut technique makes micro-vias more reliable than filling them with a non-conductive material and plating it over. You can have a solid core by filling vias. The plate-shut vias help have a flat surface that you can plate. Moreover, it prevents solder from leaking during pcb assembly, eliminating the solder joint issues. Hence, the plate shut makes assembly more reliable than other via filling technologies.
However, you can’t have plate-shut vias in certain circumstances, such as:

However, conductive epoxy is also available for PCBs having a high amount of current and heat passing vias.
In the case of via-in-pad with through plating and epoxy ink filling (conductive or non-conductive), the epoxy ink goes through polarization to develop a flat surface. Besides, it is filled through plating.
The process of via filling makes CTE stable, keeping out the plating bath solution that affects the board.

What Happens With Unfilled Vias

The BGA balls and the printed circuit board will not have any connection if the via-in-pad is not filled. If the BGA pad has vias, you will have to fill and plate over them. When the vias are between the pads, you can have dams on the solder mask to avoid the solder pastes mitigation.
However, another way is to cover the via with a solder mask to have additional protection when there are thin solder mask dams. Even if you cap vias with the solder mask, the paste can’t stop from spreading on the tracks into vias, thus affecting the mechanical and electrical connection.

What Are PCB Vias

Printed circuit boards have different layers that need electrical connection and vias provide it. So, via is a tiny hole drilled in the PCB laminates, crossing the adjacent layers. Vias are internally covered with copper in different ways. It helps pass current which is essential to run a device.
How many layers the via should cross, depends on the PCB application. Like, it can cross one to two external layers or one or multiple internal layers. Sometimes vias cross all the PCB layers.
Some vias also don’t contribute to the electrical connection but dissipate heat, so we call them thermal vias.

There are different types of vias that manufacturers practice according to the PCB application needs. Such as blind vias, buries bias, through-hole vias, and micro-vias. Micro-vias are further divided into blind micro-vias, stacked micro-vias, and staggered micro-vias.
Hence, vias play a great role in a Printed Circuit Board, eventually affecting the function of the device having that PCB. You can hire a good PCB designer and manufacturing company for this purpose. Make sure to have a thorough research in this case to select the best service.

Why PCB Vias Need Filling?
Via filling helps reduce air or liquid trapping and enhances a PCB’s function. If holes get clogged or have air, it would affect the SMT assembly at a high temperature.
What Is Conductive Via Fill?
Via filled with a conductive material helps pass current and heat through different PCB parts. Conductive-filled vias have either copper or silver filling to help conduct maximum heat far from PCB components.
What Is Non-Conductive Via Fill?
The reason behind creating the non-conductive via filling is to protect vias from debris or other elements. The name depicts that such vias can’t conduct heat or electric signals. But, copper plating is still there that conducts heat and current.
What If I Leave Via Unfilled?
When the via is not filled, the BGA balls and the printed circuit board will not have any connection. Besides, it will get contaminated, blocking the passage and signal flow.
What Is A Shut-Filled Via?

The shut-filled via is a logical and effective way of heat dissipation. In other words, the copper-shut via is suitable where the aspect ratio is 10:1, or the diameter of the vias is lower than 8mils.
How To Select The Type Of Via Fill Material?
The application of the PCB and its requirements determine the type of via fill you should have. Besides, your budget also matters while selecting the filling material and technology as described above.

Printed circuit boards help run different devices by providing them with current, so they have to be perfect t in all ways. Vias are important for a PCB because
Via filling helps have a compact PCB, minimum layers, tight BGA pitch, enhanced electrical and thermal conductivity, better routing, thick layers, less EMI issues, helps cope with low induction and offers a small route and bypass capacitors the high-frequency PCBs. There are two types of epoxy fillings of which the copper-conductive epoxy is better than silver epoxy when it comes to thermal conductivity. Also, the cost of the conductive via filling is 5 times more than the cost of the non-conductive filling.
Silver epoxy is a common practice for via filling because it is cheap. However, it is equally good at conducting the current between the inner layers of a PCB and its vias.
Would like to know more about Copper and Epoxy Filled Vias in PCB or printed circuit board assembly? Email us at sales@pnconline.com