Aluminum-based copper-clad PCB has aluminum as a base material along with other materials, including a dielectric layer, and thermal and insulating material.

Some other terms also refer to aluminum copper PCB, such as a metal-clad PCB, aluminum base, an insulated metal substrate, aluminum clad, etc.

The Reason for Using an Aluminum PCB

Aluminum PCB started in the 1970s and has developed a lot so far. It is ideal for applications with heat dissipation because it helps manage temperature as it transfers the heat far from important PCB components. It has a longer lifespan than fiberglass because of its high durability.

Aluminum PCB has an insulated metal structure (IMS) having different layers with different functions and materials. Let’s study them one by one.

It is also known as circuit copper which consists of copper foil with 1 to 10 ounces of thickness or weight. The manufacturing of this layer involves the etching of copper which is essential for a board. The copper layer helps in PCB assembly and the device connection to enhance their function. As it’s an IMS, so the base layer has a high current. The width and thickness of this layer are similar to anFR4.

Also known as a dielectric layer, the insulation prevents heat. The thickness of this layer ranges from 50µm to 200µm. Other than insulation, the layer helps in bonding. Moreover, it dissipates heat that occurs when there is a flow of current.

The metal base or a substrate helps differentiate anIMS from another kind of printed circuit board.Besides, the insulating layer has an aluminum base. While looking for a metal plate, you must consider its cost, strength,thermal conductivity, thermal coefficient, mass, as well as a strong point.In other words, the aluminum plate has all these qualities. You can also increase its effectiveness in terms of mechanical properties and conductivity by adding iron, copper, or silicon steel. 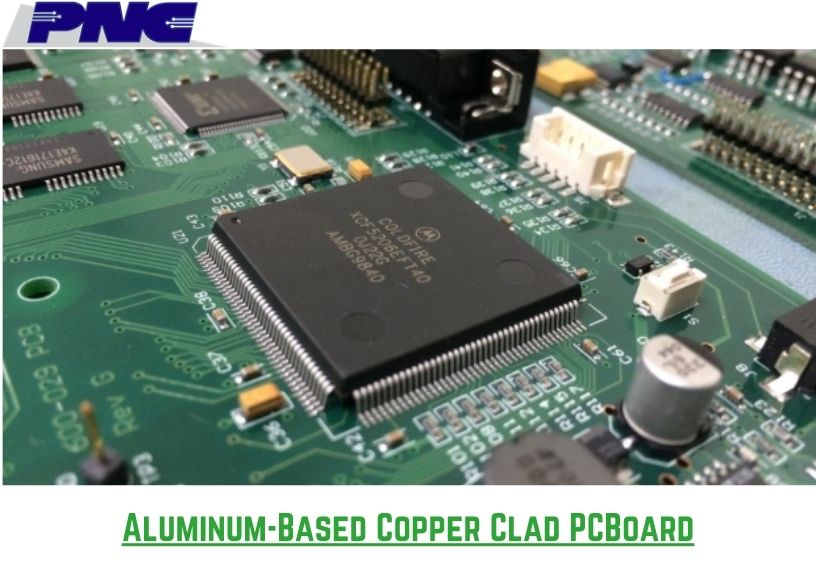 The membrane layer has an aluminum alloy base to protect it from unwanted scraping or etching. The thickness of the layer is often 1mm, whereas its temperature is either 250 degrees or it’s less than 120 degrees, depending on the intensity of the heat.

Though the main purpose of all aluminum PCBs is heat dissipation, different types come up with different structures and designs. Let’s discuss all types of aluminum-clad circuit boards.

The flexible PCB is an integration of polyamide resin and ceramic during the pcb fabrication. Both materials provide heat insulation, thermal efficiency, and flexibility like you can fold them as you want. A flexible aluminum PCB is cheaper than others, as you don’t need to buy connectors. However, you can’t change the final product in this case.

A through-hole aluminum circuit board involves the backfilling and pre-drilling of one aluminum layer. After that, the laminate material is applied, leading to the construction of a core with several layers. Later on, both sides of the board are laminated with thermal bonding. Then, in the end, it comes drilling.

Such a PCB has many thermally conductive layers. Its design consists of circuitry layers present in the dielectric with blind vias or thermal vias.

It is ideal for complex circuits, like power supply products. But, it is expensive and does not suit a PCB having a single-layer layout.

Such a PCB has epoxy resin as insulation. So, the material should have a high thermal conductivity in this case.

Such a type of PCB has insulation of polyamide or the layer has fiberglass inserted between the epoxy resins. Both materials make a PCB flexible and easy to assemble.

Some Common Applications of Aluminum PCB

There are many applications of aluminum PCB, especially they are ideal for technological equipment and devices, such as:

A circuit layer should have a thick copper foil. The thickness of up to 3ozcauses a challenge, as you have to compensate in terms of etching width. But, if you fail in this case, the width would affect the etching. So, you have to manage the etching parameters.

Sometimes in an aluminum-clad PCB, the thickness of the copper foil affects thesolder mask printing. When the trace copper is thick, it makes the etched image different in the baseboard and trace surface, making the printing process hard. You can resolve this issue with a good solder mask oil or filling in the resin is also an option,but it should be prior to the solder mask.

While making an IMS, the manufacturer uses mechanical drilling. Moreover, it involves molding as well as V-Scoring, like on internal vias. But, such drilling reduces the electrical strength of the board. You can avoid it if you use a special cutter for milling andelectric milling, especially forlow-volume production.It is also essential to eliminate the burr production that you can do by adjusting the drilling parameters.

Sometimes you have to store the aluminum PCB before using it, but it can change its color making it black or yellow. So, you must place the PCB in a moist-free room to avoid any suchdamage. It would be better to use an aluminum PCB within 48 hours of unboxing it.

What Is An Aluminum-Based Copper Clad PCB?

As the name shows, aluminum-based copper-clad PCB has aluminum as a base material. Whereas it has other materials, such as the dielectric layer, and thermal and insulating material.

Though aluminum plate is cheap, the manufacturing and assembly process of the PCB makes it expensive.

What Are The Benefits Of An Aluminum PCB?

Aluminum-clad PCB helps manage temperature as it transfers the heat far from other PCB components. It has a longer lifespan than fiberglass and resin.

What Are the Manufacturing Issues Of Aluminum PCBs?

In general, aluminum PCBs are cheap and provide better heat dissipation than other materials. It uses surface mount technology and has a less production volume than other circuit boards. It consists of different layers and it has a wide application.

Would like to know more about the aluminum-based copper-clad PCB or pcb assembly services? Email us at sales@pnconline.com